Install advanced and worry-free alarms in your home 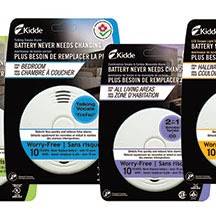 Photo caption: Changing alarm batteries can be a thing of the past now because Kidde's "worry-free" models have sealed lithium batteries that last 10 years from activation.

(NC) Smoke and carbon monoxide alarms don't take rocket science to operate but homeowners do say they want simplicity. Most of us just want to install the alarms and then rely on them to protect our families. The problem is: these life-saving devices do require a minimum of attention to function at peak performance so that the alarm sounds anytime danger presents itself.
One Canadian company says it has used research to make it easier for families to stay safe with its new line of aptly called “worry-free” smoke and CO alarms. New models from Kidde Canada include CO alarms, smoke alarms and combination smoke/CO alarms in battery powered, plug-in and hardwired configurations.
“Looking at fire investigation statistics it was clear that many homeowners still have issues with two things: false alarms and replacing batteries,” says Carol Heller, a Kidde vice-president. “In more than two-thirds of fatal fires, alarms have either been removed or the batteries are dead or have been taken out. So our research and development division set to work, figuring if we could reduce false alarms caused by cooking and eliminate the need to change batteries every year consumers would appreciate it and stay safer too.”
It seems to be working. The company's “worry-free” alarms are proving a hit with consumers as well as fire prevention educators, a key audience group.
Central to the success of the new alarms are intelligent photoelectric sensors that do a much better job differentiating between a real fire and kitchen smoke or shower steam. But the biggest raves are coming for the new batteries found in the alarms.
“Changing alarm batteries can be a thing of the past now because our worry-free models have sealed lithium batteries that last 10 years from the time you install the alarm,” Heller explains. “Since the alarms themselves also last 10 years, that's a decade of protection and the only thing a homeowner has to do is push the test button once a month to ensure the circuits are working as they should. It saves about $40 on batteries over the life of the alarm, but the best outcome is that people are safer. They no longer need to tamper with the devices they installed to save their lives in the first place.”
On the packaging, this newest generation of alarms recommends the ideal installation location for each model, taking the guesswork out of replacing worn out alarms. The National Fire Protection Association recommends that smoke alarms be replaced every 10 years. For carbon monoxide alarms, the rule of thumb is to replace any models manufactured before 2008. Heller says that all Kidde smoke and CO alarms now last a full 10 years.
If you are living in the Greater Toronto Area, you may have interest in whats happening in real estate market, feel free to visit my website www.realtorpankajpatel.com
at March 16, 2015